Adding yet another jewel to his crown, Shishir Jaipuria, Chairman of Seth Anandram Jaipuria Group of Educational Institutions and FICCI Arise has bagged the prestigious Lifetime Achievement Award in Education Leadership at EducationWorld India School Ranking Awards 2022-23, held on October 11, 2022, in Gurugram.

Shishir Jaipuria is an educationist and thought leader of great eminence. As the Chairman of Seth Anandram Jaipuria Group that has a legacy of 77 years in the field of education, he envisions a new paradigm in which knowledge, skills, and values will blend to form new-age competencies to nurture learners into confident achievers in the 21st century. The group has 17 K-12 schools, 4 preschools, 2 management institutions and a teachers’ training academy named Saamarthya Teachers’ Training Academy of Research (STTAR), formed in collaboration with Jaipuria School of Business. Shishir Jaipuria also serves as the chairman of FICCI Arise which looks after the interests of India’s independent schools. He has previously headed the National Skill Development Corporation (NSDC) as Director.

The citation by Education World stated, “For his extraordinary and sustained commitment to establish high quality K-12 schools, undergrad colleges and business management institutes over a decade, the Editors and Board of Directors are proud to present Mr. Shishir Jaipuria the EducationWorld Lifetime Achievement in Education Leadership Award 2022-23 and induct him into the EW Hall of Fame of Indian education. 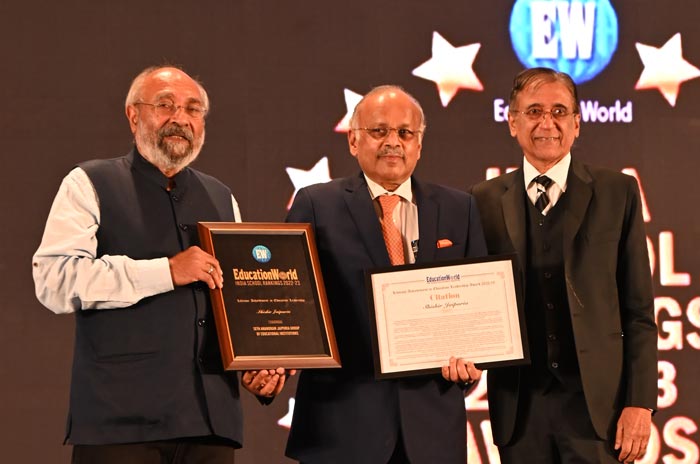 Shishir Jaipuria accepted the award to a rousing ovation by the audience.

Sharing his delight on receiving the award, Shishir Jaipuria said, “I am extremely grateful and honoured to receive this Lifetime Achievement Award in the presence of esteemed guests. I would like to attribute this milestone to all the teachers who have been with us during this journey of 75 years. We are also grateful to all the parents who have put their faith in us. With the world transforming into a global village today, innovation, creativity, technology, inter-personal skills, and international exposure will play a key role in shaping the workforce of tomorrow. The private sector has an extensive role to play in the education space in this regard and we will strive to live up to the expectations of our country.”

The schools of Seth Anandram Jaipuria Group have also done well in the Education World India School Rankings 2022-23. Seth Anandram Jaipuria School, Ghaziabad, was awarded No. 1 rank in India for Best Technology Integration. The group’s school in Kanpur has been ranked 1+ in the city and the school in Lucknow has risen to the 5th spot in the city within six years of its launch. The group’s partner schools in Nanpara, Raebareli, Naini, Unnao and Dibiyapur have secured top ranking in respective cities.