TOP 10 STREET FOOD OF THE ‘CITY OF DREAMS’

June 15, 2020
Mumbai may be the financial capital of India and the home of Bollywood, but it is also a true food lover’s paradise. Yes, if you love street food then the “city of dreams” is the best place to be as every corner has a stall with a few quintessential dishes—dishes that are part of the daily meal routine for almost all in the city.

A huge aspect of culturally diverse Mumbai is the culinary experience the city offers boasting a variety of street foods that it puts on display and everyone, from billionaire to beggar relishes it.

From the traditional Marathi breakfast with ladi pav (fluffy white buns) to the tangy import of South Indian sambhar, the best street foods in Mumbai have something to suit every taste bud. Many of these dishes are vegetarian, and all are prepared from scratch—sometimes before your very eyes—without any processed chemicals or additives, so you can definitely feel good about what you’re eating.

While you can find these dishes on virtually every nook and corner of the city, die-hard Mumbaikars however know the exact spots where the tastiest of street foods exist at the best of prices. It’s a lot to navigate out there, so I have done the work for you!
Here are Mumbai’s 10 best street foods to certainly relish on your next trip to the city. 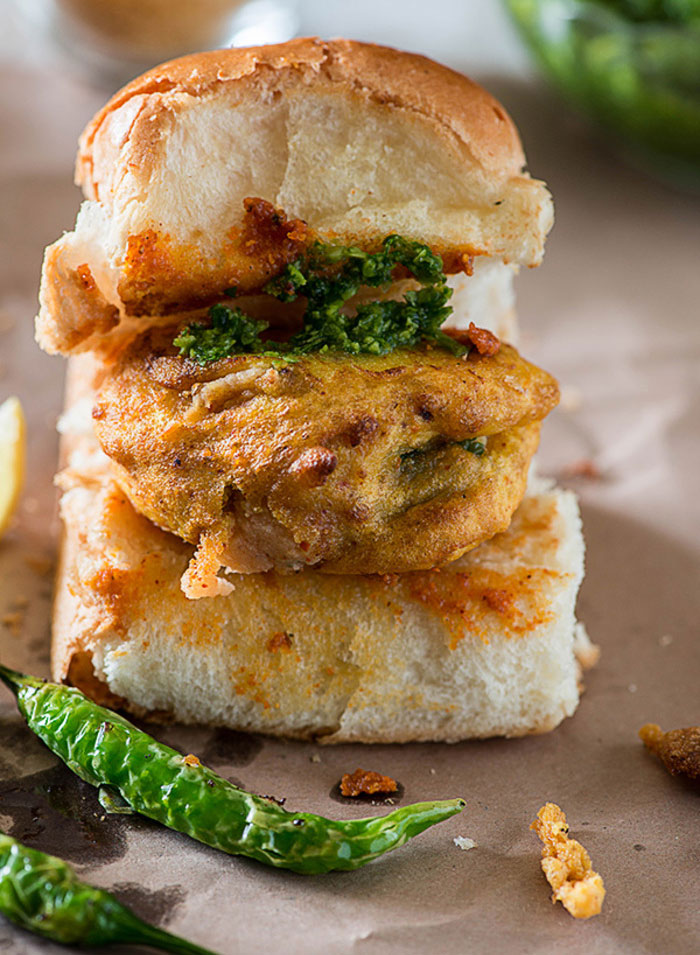 1. Vada Pav
The deep-fried golden potato that forms the basis of this classic Mumbai dish is shaped like a tennis ball. But once it’s stuffed in a bed of traditional pav with coriander chutney, red chili powder, and tamarind sauce, it’s the street food everyone craves at the end of the day. It is to Mumbai what fish and chips are to England. The potato cutlet itself is delicately spiced with green chilies and coriander. If you’re in Mumbai and see a crowd around a cart with a heavy cast-iron pan on a makeshift stove, you can bet it’s a vada pav vendor. And you owe it to yourself to go try it, because it’s one of the best street foods in this city.

Best Catch: Vada pav carts are scattered across every street in Mumbai. But Nitin Patil’s vada pav stall, at the heart of IC Colony opposite the famous IC Church, is one of the best; it’s been featured in the national newspaper. The best time to go is at 5pm when the fire is started—once the first batch of vadas are out, there’s a constant throng of people that doesn’t abate until about 8, or when he’s sold out. 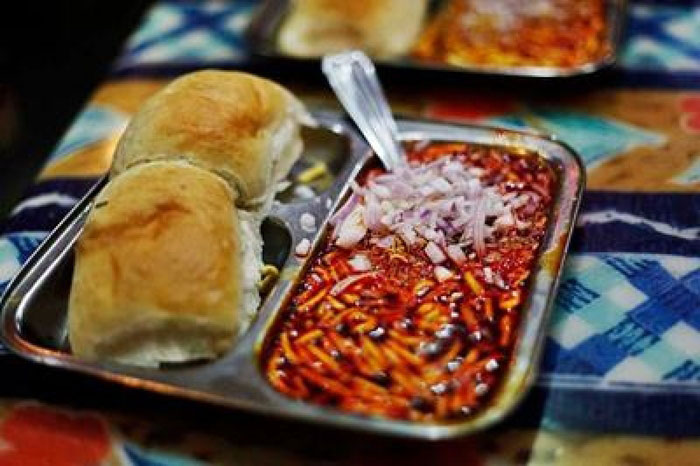 Best Catch: Traditional Maharashtrian enclaves like Dadar have the best restaurants to enjoy misal, such as the ever-popular Aaswad. 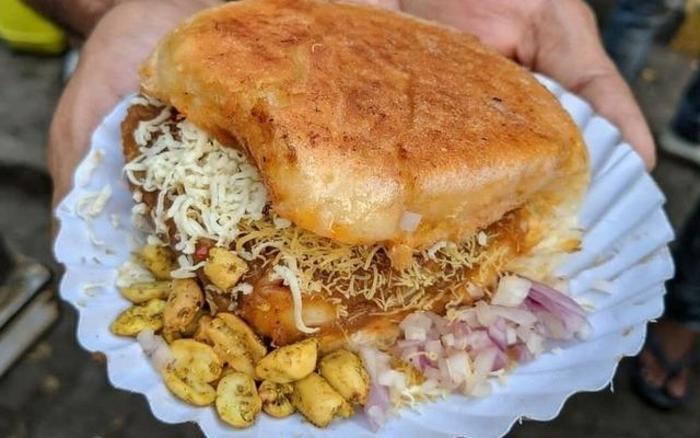 3. Dabeli
Dabeli is another popular street food that originally came from Kutch, Gujarat; because of this it’s sometimes called Kutchi dabeli. Boiled potatoes are prepared with a special spice called dabeli masala that’s made from dried coconut, red chilies, bay leaves, cloves, and other whole spices. Often it is served with pomegranate seeds to add crunch and lend sweetness to the spicy mixture. Served over bread this is a sumptuous evening snack.

Best Catch: The Bombay Canteen, makes an entire meal of its dabeli topped with sev (crunchy slivers of fried gram flour) and served with chips and a dip. 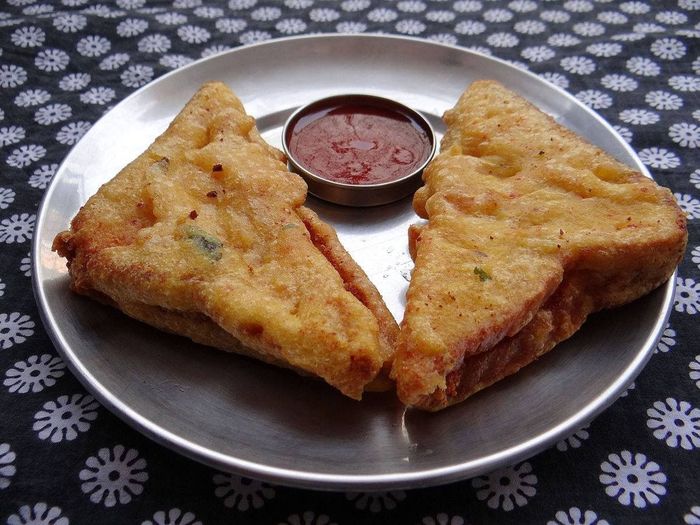 4. Bread Pakoda
Anything deep-fried is extremely popular in Mumbai, and so this Punjabi transplant, bread pakoda, has been quite the hit. Slices of bread are stuffed with a spicy vegetable mixture, dipped in a batter of gram flour, and deep-fried to golden perfection.

Best Catch: To enjoy your bread pakoda you must also have some piping-hot chai. MusTea Teateria, in Andheri offers them both as part of its “Bombay special.” 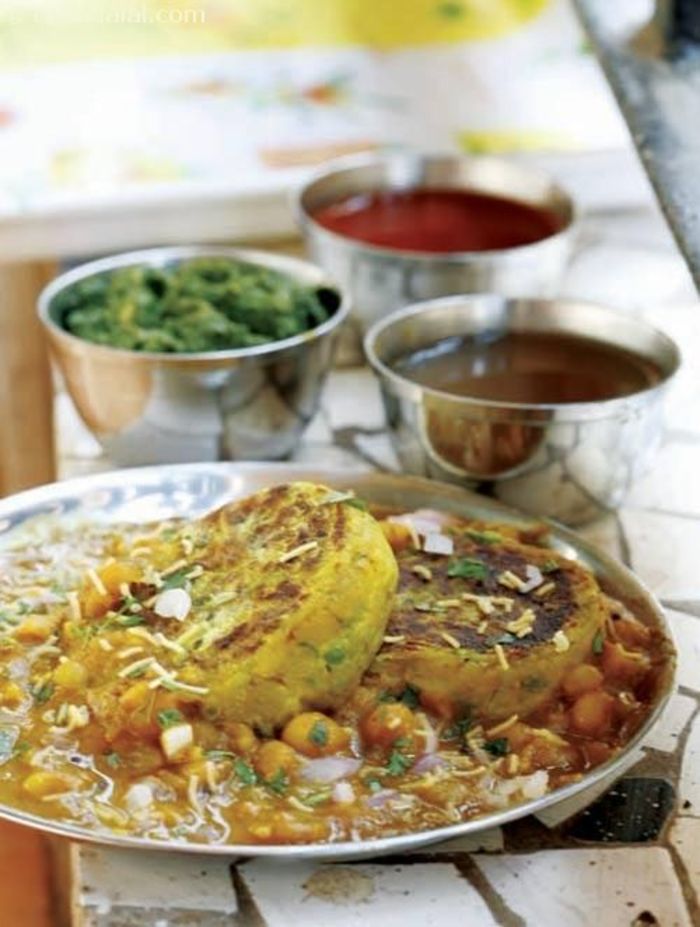 5. Ragda Puri
Golgappas from Delhi and phuchkas from Calcutta were rechristened in Mumbai as pani puri. However, as all things morph in this city, gradually Mumbaikars started adding ragda, or chickpea gravy, to their semolina puris. Along with this chickpea gravy, a tamarind-date chutney and chaat masala mixture, plus a topping of mashed potatoes, onions, coriander, and dried mango, makes this crunchy streetside snack Mumbai’s own. Each plate typically serves six puris.

Best Catch: Everyone in Mumbai knows that you must try the chaat and ragda puri stalls at the Mumbai Chowpatty beach. Here you can enjoy plate after plate of ragda puri right on the beach with the ocean lapping at your heels. 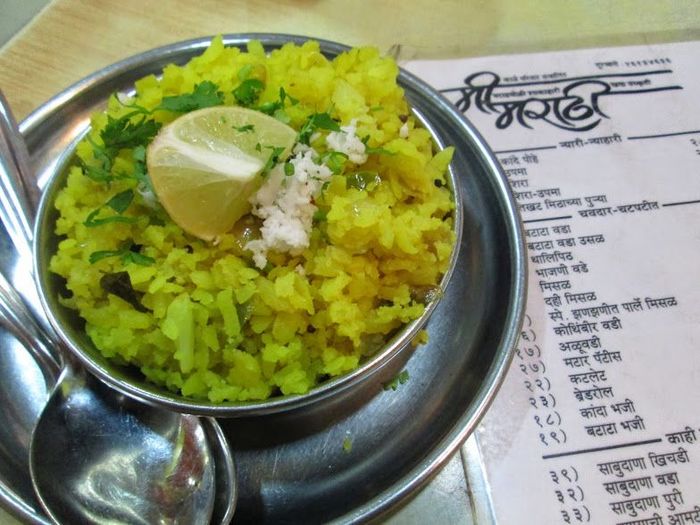 6. Poha
This is a Marathi breakfast dish made of flattened rice called chura. The poha is made with onions, mustard seeds, coriander leaves, and green chilies and is lightly spiced with nigella seeds and turmeric. Often it is served with peanuts and fried potatoes. 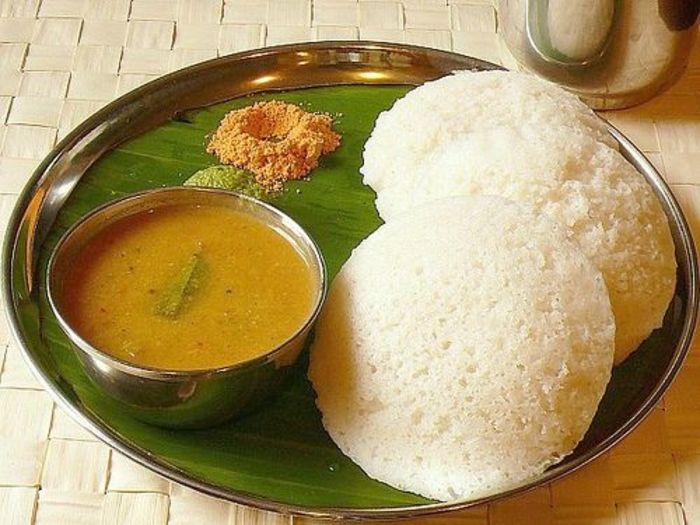 7. Idli Sambhar
This South Indian import is nothing but steamed rice cakes, drenched in a vegetable-laden lentil curry and coconut chutney. It’s simple and healthy. You can either choose to dunk your idli in the sambhar, or lentil curry, or have them soak up all that spicy curry and then eat the juicy chunks of moringa pods (aka “drumsticks”), pumpkin, and eggplant. This dish is particularly popular because it’s super cheap (just 30 INR, or 40 cents) and is a meal that can double as lunch too. Moreover, many Udupi-style restaurants will replenish your sambhar every time a server passes (sometimes you have to request this, but it’s still free of charge).

Best Catch: Mysore Café, in Matunga is by far the most popular and unpretentious place for idli sambhar. Even India’s richest man on the Forbes list, Mukesh Ambani, prefers to eat here when he has a craving for South Indian food. 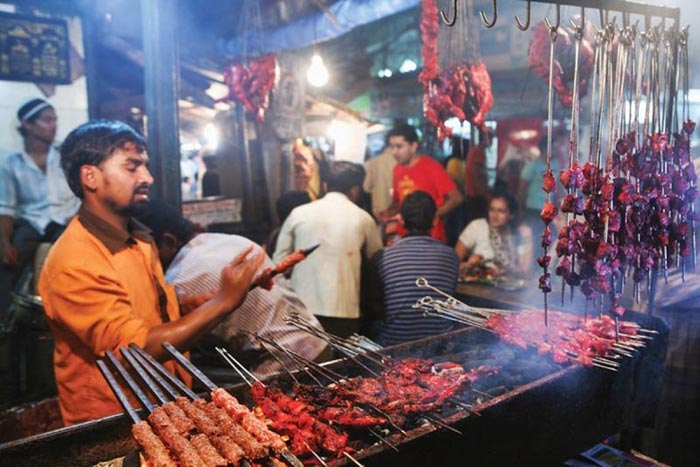 8. Kebab
Who doesn’t enjoy the Mughlai delicacy of succulent meat, grilled to perfection? Kebabs and kebab rolls are the typical street food dinner in Mumbai when people want to celebrate. The chicken or mutton kebabs are marinated overnight and then grilled right in front of your eyes. Served with a mint chutney in Indian flatbreads (chapatis or roomali rotis), this is a must-try for everyone. And for vegetarians, there’s the option of paneer kebabs. Yum!

Best Catch: Mumbai’s iconic kebab counter, Bademiyaan, Apollo Bandar, Colaba, has been serving kebabs since 1946. You cannot go wrong with any kebab you order here, but we definitely recommend the succulent lamb seekh kebabs. If you’re not keen on lamb, try the chicken seekh kebabs, which are served in soft rotis with mint chutney and freshly squeezed lime. The hero here is the meat, with its subtle smoky flavor. 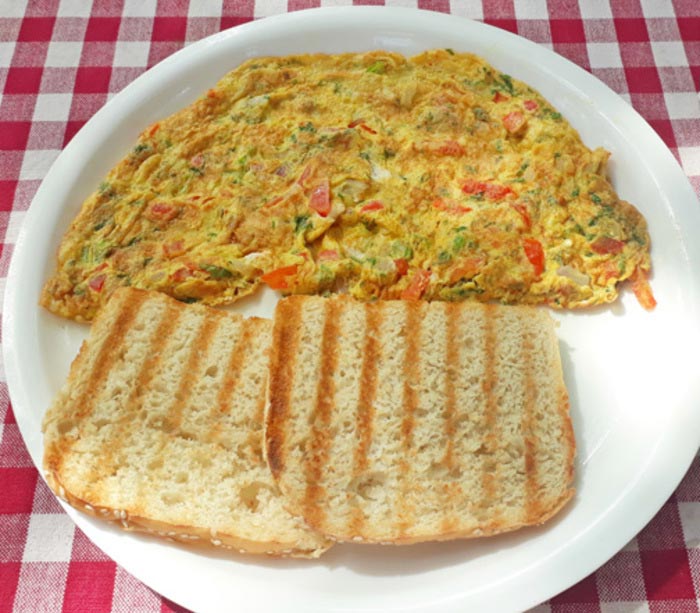 9. Irani Omelet
The classic Irani omelet is one of the most famous breakfasts you can have in Mumbai. Lightly spiced and mixed with chopped coriander, onions, tomatoes, and chilies, there’s nothing that special about it. Maybe it’s the butter Parsis use. For whatever reason, the Irani omelet is still a very popular street food here. Enjoy it with a cup of sweet Irani coffee and your day will be gold. 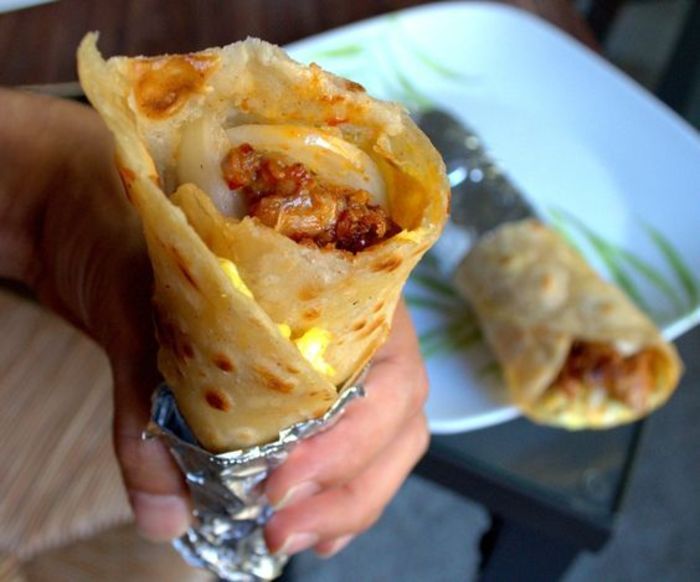 10. Frankie
Mumbai is the birthplace of Frankie which consists of flour wraps filled with mutton, eggs, mashed potatoes, chicken, or anything else you can imagine. The main ingredient is often complemented by raw onion and spicy sauces. This dish was created by Mr. Amarjit Tibb who was inspired Lebanese style pita bread wraps when he visited Beirut. After some experimentation, Frankie was born.

Best Catch: It is currently found in many stalls across Mumbai, though the best one still remains Tibb’s Frankie which has its branches all over the city.

So what are you waiting for folks? The first thing you do post this crisis period is to grab the next flight or train to BOMBAY, if you stay elsewhere, or just rush to your favorites, MUMBAIKARS!! 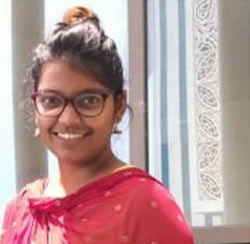 -Arthita Ray
An undergrad student of Amity University Kolkata. An avid orator, anchor, creative writer, singer, debater and a movie and sports buff. Based in Kolkata. Have work experience with The Telegraph, Friends FM and GreyMatters Communcations.