Rath yatra: the festival of chariot

June 02, 2020
Rath Yatra is coming but it might be little different due Coronavirus Pandemic. We might see heavy duty cars pulling in chariots. Interesting isn't it? But do you know how this Rath Yatra is conducted when there isn't a deadly virus in the air. Let me tell you a few things about Rath Yatra. 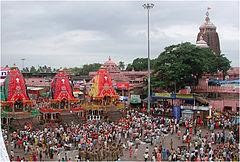 Rath Yatra is an annual event taking place in the month of June-July in Puri. Rath Yatra is a festive celebration of odisha when Lord Jagannath, Balbadhra and Subhadra's idols are taken out of the Temple and carried on the chariot for a small journey. This practice has been carried out since 1396 CE. The whole event is a month-long process and carried out by priests, kings, Ordinary people and devotees together. Symbolising equality in front of God despite the social difference.
According to the mythology, during the Summer (June) lord Jagannath, Subhadra and Balbadhra visit their aunt's house which is two miles away. Lord Jagannath wishes to visit his birthplace.  According to tradition, the deities’ idols are carried from the temple to wooden chariot which are specially made every year by hands of the special temple carpenters. The deities are placed in chariot one by one and Gajapati Maharaj, kind of Puri and now his descendants sweep the chariots himself before the deities leave for their journey. The chariots used to be pulled by the devotees and priests of the temple. Since every devotee wanted to participate and some mishaps now the military and police force does the honour. They pull the chariot nearly 2 miles North of the temple to Gundicha temple which is Lord Jagannath's aunt. Where they stay for 7 days and enjoy delicious food. As soon as they reach there, they are treated like any kids that visit their auntie's place with food and special treatments like recreational activities. Another day of this whole journey that is important is the Suna Bhesa (Golden attire) where all three deities are dressed up in gold.
All 7 days the devotees get to see the duties without any restrictions and can even climb the chariot with special permission from the Temple authorities. All seven days it's a celebration with traditional dance and music and offerings from deities. People even come from foreign Countries to witness this event. It is also believed that this tradition was started after the restriction was made for non-Hindu from entering the Temple. Even though the decision was taken for safety purposes it was felt a little unfair and biased for those who want to seek the glimpse of Lord Jagannath. So, the Rath Yatra also became an indirect way of seeing the deities in their idol form. The foreigne and non-Hindu devotees especially visit Puri during this time of the year. 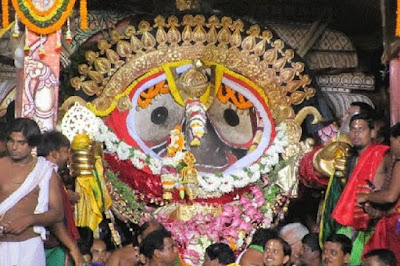 There are 6 events which are considered as the key activities of Rath Yatra. These are:-

●    1. 'Snana Yatra' is the beginning of this event. It is When one the Deities take bath or more like play in water all day and night and then fall sick for almost 2 weeks. They are thus treated with traditional practices. It has become a set of traditional practices.
●     On 'Sri Gundicha', the Deities are taken in chariot to their aunt Gundicha Goddess to her temple.
●     The Bahuda Yatra is basically the home. Coming ceremony. The Lords are brought back to their home temple.
●     Suna Besha (Golden Attire) is the event when the Deities wear golden ornaments and are welcomed home.
●    'Adhara Pana' is an important event during Ratha Yatra. On this day sweet drink is offered to the invisible spirits and souls, who would have visited the celestial event of the Lords, as believed by the Hindu tradition.
●    Niladri Bije is what the last day is called. On this day, the Deities are taken back inside the Temple and placed on their seats.
This is not just a massive event but an important celebration of our Odia culture. The devotees from all around the world visit Puri to seek the blessing of Lord Jagannath. The event is also telecasted on broadcasting network and now also live streamed on internet but the devotees who aren't able to attend the event in person. If you ever get the opportunity to attend Rath Yatra then do visit. The celebration of together keeping the Barrier of ethnicity away from the religious land of Puri.