May 19, 2020
When we talk about entertainment, there are a lot of genres that click our minds. One such genre happens to be Tamilian Entertainment. Over the years,
their dance, music, songs and movies have not only earned a huge fan base, but also made Bollywood remake a few of them in their own style.
A few of these movies and songs are a must watch, if not watched as yet; 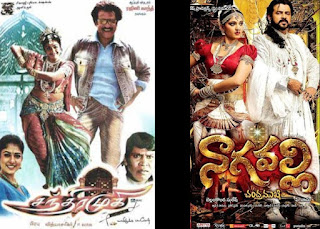 Chandramukhi, a film released in 2005. Acted by famous actors like Rajnikanth, Jyothika, Vineeth and Sonu Sood. A horror themed movie that has its comedy moments as well. The plot being that an NRI after getting married to his wife, comes back to stay in his ancestral home. Little does he pay attention to the warnings of ghosts and eerie events. Later in the story, with the turn of events, he happens to call a psychiatrist who helps solve the mystery of these uncanny feels.
This movie has a sequel, called Nagavalli. Which is a continuation of the first part. Here, Shankar Rao, who happens to be a businessman, starts experiencing odd events with his family at his home. Followed by this, he calls a psychiatrist, named Dr.Vijay, and solves the ultimate sequel. Actors like Anushka Shetty and Dagubatti Venkatesh playing the main lead in the movie.
This movie was remade in Bollywood, in the name of Bhool Bhulaiya, that roam around the same plot, casting Vidya Balan, Akshay Kumar, Vineeth, Paresh Rawal, Rajpal Yadav and many other famous actors. Only difference being that, in Tamil, the drama and songs are quite involved and intense. If you are not following from the beginning, it leaves you clueless in the middle. A must watch for the ghostbuster fans! 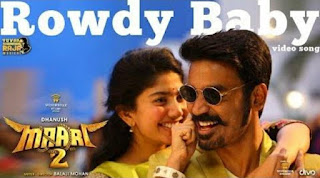 One of the most viewed tracks of 2018. Maari 2. A movie that had actors like Dhanush and Sai Pallavi in the main lead. This song of the film gained a huge fan base only for the music and dance. As we all know that Dhanush not only is an amazing dancer, but singer as well. While his acting has always had a lot of followers nationally and internationally, he happens to be one of the most entertaining and well-paid actors of the film industry. This movie is a sequel of the first which was also made a hit back in 2015.
Talking about the song. Rowdy Baby has been a great craze for most. Right from the cast to dancing and choreography. The entire dance element has been an eye catcher with the props used and dance moves. We can always bank on Prabhu Deva for that. With his grooves and Dhanush's dance style with Sai Pallavi, it got them winning the best actor and actress award for this movie back then! It sold globally so much, that you saw international youtubers and dancers posting their Zumba, with this song. Quite a classic! Bollywood songs happen to be a craze for all of us. The difference lying in the energy of dance moves. As you have noticed, even Tamilian songs be it slow or fast, have a base at which remains static moves. They have a lot more to offer, fun wise. 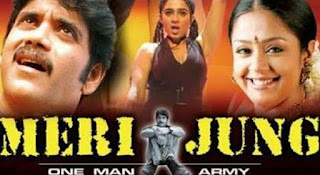 The most famous action movie of 2014. A typical Tamil action-based drama. This movie has a mixture of comedy, romance and action all working at the same time. Very well coordinated scenes that leave you wanting to watch more to find out what happens at the end. One would say this is Akkineni Nagarjuna's best movie apart from Don and Siva. A 2004 sequel, that continues with the 2014 action genre. The film is about an orphan, who starts bonding well with his landlord's son, named Adi. In the movie, he is seen falling in love with a mafia's daughter. When Adi is killed, Mass seeks to gain revenge. To find out more about what happens, do take a look at this.
We've always known how Bollywood movies are very long with its time limit. But, guess what, Tamil movies are even longer and filled with absolute entertainment, that wouldn't leave you bored for even a moment. From their songs to movies, it lasts quite long. Each of their output has immense strength, that portrays in each scene of a song or dance for that matter. 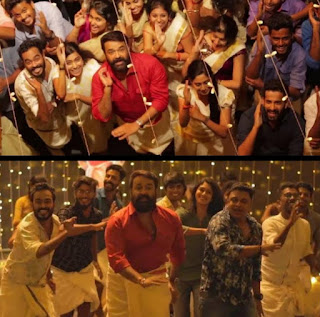 Entammede Jimikki Kammal
A song that hit the chartbusters back in 2017. From the well-known movie, Velipadinte Pusthakam the singers ; Vineeth Sreenivasan and Renjith Unni have done a great job. This song happens at the end of the movie when the main lead who's acting as a professor in the film, wants to raise money and build hostels for students by making a short film in honour of the true story, Vishwan. Once this goal was accomplished in the movie, at the end, the students and professor in the film, get together and dance to this song. In reality as well, the students of colleges in Tamil had even posted YouTube videos of them dancing to this song, that gained a lot of popularity. It is a song of festival, joy, happiness and content. If you haven't heard it as yet, it's a must! I'm sure, it won't keep you bored at all…
We can see how similar beats of classical instruments are used in different ways in Tamil music. The same that is used in Bollywood to give it a soft base, is also used here to create positivity other than slow motion sequences frequently. 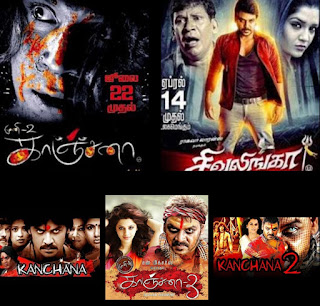 Last, but definitely not the least, are the sequels of the movie Muni, released in 2007. The plot roams around Kanchana, who follows a man who fears ghosts. This man happens to be possessed by the spirit of Kanchana, who is a transwoman, seeking revenge. Kanchana, Kanchana 2, Kanchana 3 and Kanchana Returns, are all the continuations of this horror genre that keeps you dazed and amazed. Comedy, romance, thriller and fear. It has a bit of everything and doesn't make you sleep during the entire journey. There are your moments of emotions let out. These movies are indeed expected to be done by Raghava Lawrence other than our favourite Rajnikanth. Other actors in these sequels happen to be, Taapsee Pannu, Nithya Menen, Kovai Sarala, Renuka Chouhan, Vedhika Kumar, Nikki Tamboli and many more. This outstanding work other than Raghava's, Shivalinga and Laxmmi Bomb are renowned till date. It never grows old. Bollywood also has its times, but the production of works that include a bit of all happen very rarely in Bollywood.

Bollywood being static with their inputs of theories and logic, have often gone off the hook while coming towards the end of their movies. Tamil entertainment has its own way of keeping you glued till the end. You wait for more and the suspense is built throughout. Not in the obvious, of the lot, the content filled with other elements of drama and more melodrama can only be produced by Tamilian Entertainment, as their expressions and dialogues are always on point.