Satyajit Ray films that every film enthusiast must watch

May 02, 2020
In the time when cinema was a lowbrow entertainment and fast buck was the driving force, Satyajit Ray was one of the first rebels, from Pather Panchali to pikoo ray made 30 films and, in the process, has left an everlasting mark on Indian cinema. His films have paved the path for many upcoming film makers and gave them the
courage to make films that are outside the framework of commercial cinema. Perhaps his greatest achievement was depiction of women in Indian society as silent sufferers and how they are treated as mere sex objects, as we can see in his films like the big city, Charulata and The distant thunder where his female characters are characters with morality and virtue in a world where values seems fragile.
Ray came up with the set of new ideas in his films about India’s contemporary landscape where his films depicted destruction of old values, the tyranny of the new and impersonal and absence of faith in the modern life. Although in the last few years Ray concentrated on films for children based on his own writing which are considered some of the finest films ever made for children.
His film pather panchali which won him won him eleven international prizes, including the inaugural Best Human Document award at the 1956 Cannes Film Festival completely altered India’s film economy it showed that it was completely possible to make viable films without studio patronage film was written and directed by ray and was produced by govt of West Bengal and along with the critical acclamations the film was a commercial success.
In his lifetime, Satyajit Ray won the National Award for the Best Director six times, which is the most by any filmmaker so far. In total, he won 32 National Awards by the Government of India. Satyajit Ray received an Honorary Academy Award in 1992, becoming the first Indian to receive an Honorary Oscars. He received the Award for Lifetime Achievement. He was awarded the Legion d'honneur by the President of France in 1987. He was also awarded the honorary Doctorate by Oxford University, the second film personality to receive the honour after Charlie Chaplin.
And on his 99th birth anniversary I decided to compile a list of films by Satyajit ray that every film enthusiast must watch
1. The Apu Trilogy: The Apu Trilogy comprises three Indian Bengali language films directed by Satyajit Ray: Pather Panchali (1955), Aparajito (1956) and The World of Apu (1959). They describe the childhood, education and early maturity of a young Bengali named Apu (Apurba Kumar Roy) in the early part of the 20th century. They are one of the greatest films of all time and are often cited as the greatest films in the history of Indian cinema. It’s a must watch for every film enthusiast. 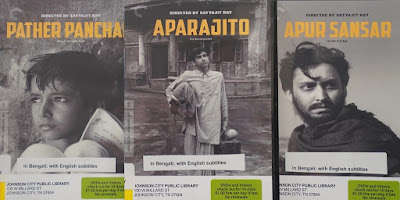 2. Jalsaghar(The music room): With The Music Room (Jalsaghar), Satyajit Ray brilliantly evokes the crumbling opulence of the world of a fallen aristocrat(roy) Ray brings Roy’s world to life with glittering images of fireworks, gleaming chandeliers and the extravagance of his music room, where he invites sitarists and dancers to entertain him and his guests. But there is also an image of doom – a lightning storm, an insect drowning in a goblet, a spider crawling across the portrait of one of his illustrious ancestors – that suggest these musicians are merely fiddling while Roy’s Rome burns. 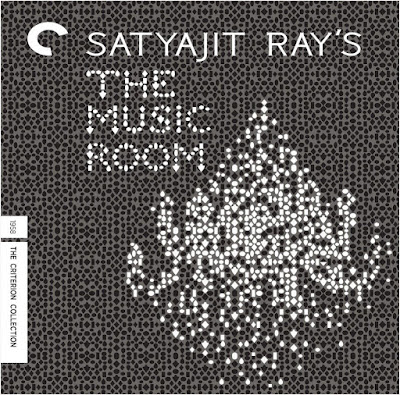 3. Charulata (1964): This is a film of great grace and elegance, and also of considerable wit. But underneath the surface charm is a great seriousness. As always, Ray depicts the development of the characters with great insight and sensitivity, and coaxes fine performances from his cast. Western critics, in discussing this film, often draw parallels with the works of Chekhov or of Henry James, but Ray's inspiration was actually the great Bengali writer Rabindranath Tagore, on whose short novel this film was based. As a piece of film-making, it is absolute perfection - a real gem. It shows the story of a lonely wife of a newspaper editor falls in love with her visiting cousin-in-law, who shares her love for literature. 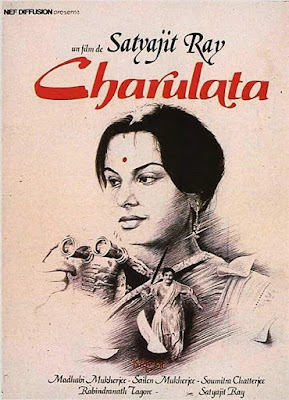 4. Sonar Kella: A brilliant adaptation of rays own novel feluda. The greatness of the movie is that it successfully portrays the original characters so much so that you just wonder which was made earlier, the story or the movie much like The Godfather. Such a successful adaptation of a novel is very hard to come by. Soumitra Chatterjee as Feluda and Santosh Dutta as Lalmohan Ganguly are simply amazing. 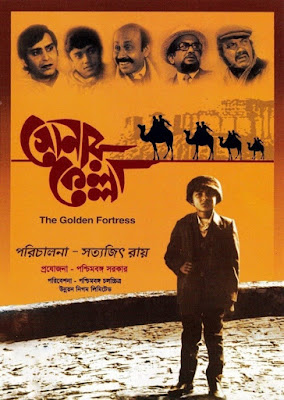 5. Shatranj ke Khiladi: Satyajit ray’s only Hindi feature film(even though he made a Hindi telefilm later, sadgati) it tells the story of Wazed Ali Shah was the ruler of one of the last independent kingdoms of India. In this movie Ray showed us his mastery in costumes, their colors, landscape and above all the tempo and dialogs. Setting of the movie from the very first scene to the end is just amazing in a sense how he tackles different issues to recreate that era. The film also features the actors Sanjeev Kumar, Saeed Jaffrey, Shabana Azmi, David Abraham, and Tom Alter, as well as Amitabh Bachchan as the narrator. 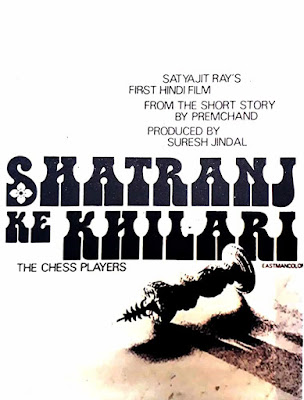