May 22, 2020
It really seems as if mother nature is disgusted with humans, and really wants to punish or get rid of us. Firstly, the whole world is going through the pandemic of COVID -19, on top of that Cyclone Amphan (20-21 may 2020) destroyed a lot of West Bengal and Orrisa within just few hours of its arrival and next Pakistan Plane crashes in a residential area today, i.e. 22 may 2020. Earth is probably healing itself, by reducing population. 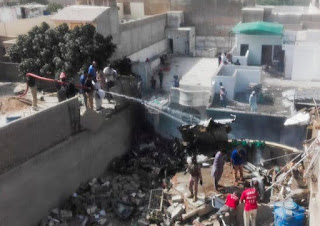 This Pakistan flight PK-303, flown by Captain Sajjad Gul, was coming from Lahore and was about to land in Karachi when it crashed at the residential area of Jinnah Garden near Model Colony, just one minute before landing. The plane model is PIA Airbus A320 which was carrying 99 passengers and eight more crew members.
According to a spokesperson of the national airline, “The captain informed the air traffic tower that he is having problems with the landing gear before disappearing from the radar.”
Till now, as confirmed by the rescue and police officials at least four bodies have been recovered from damaged houses and several are taken to hospitals, though it’s too early to say exactly how many people have died in this tragic incident.
The Minister of Health and Population Welfare has declared emergency in all major hospitals.
Videos and footages showed huge smokes rising from the site of the crash.
After the aircraft crash on December 7, 2016 of PIA ATR-42 from Chitral to Islamabad, this is the first major crash in Pakistan.
According to one of the witness and resident of the colony, the aircraft had fire coming from its wings before crashing onto the roofs of the houses.
As reported on 18:17, city’s Mayor Waseem Akhtar told the Reuters that he has no expectation for survivors from the plane though this is not confirmed. We all can only pray and wait till we receive a confirmation.