May 23, 2020
Did you all enjoy the first list? Well, here's another one for you this quarantine to keep you away from boredom and frustration what with staying away from our friends and performing our daily activities, so why not binge watch another list of movies to while away time? A sure way to ruin the perfect night on the couch is having to waste your precious binge time searching for the perfect flick. So here I am with a bunch of epic blockbusters for you to binge watch again. 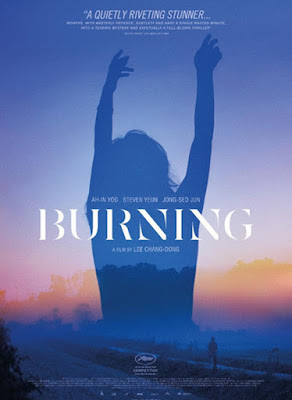 BURNING:
Some mysteries simmer; this one smolders. In this adaptation of a Haruki Murakami short story, writer and director Lee Chang-dong has included many elements of the acclaimed author's slyly mischievous style of cats, jazz, cooking, and an alienated male writer protagonist. He also invests the material with his own dark humor, stray references to contemporary news, and an unyielding sense of curiosity. We follow the aimless aspiring novelist Lee Jong-su played by Yoo Ah-in as he reconnects with Shin Hae-mi played by Jeon Jong-seo, a young woman he grew up with.  When Steven Yeun's Ben, a handsome rich guy with a beautiful apartment and a passion for burning down greenhouses, appears, the film shifts to an even more tremulous register. Can Ben be trusted? Yeun's performance is absolutely phenomenal and perfectly calibrated to entice and confuse the viewers. Each frame keeps you guessing on what's going to happen next.
THE BALLAD OF BUSTER SCRUGGS:
The Coen brothers gave some big-name-director cred to Netflix by releasing their six-part Western anthology on the streaming service, Buster Scruggs is clearly a cut above most Netflix originals. Featuring stars like Liam Neeson, Tom Waits, Zoe Kazan, and more, the film takes advantage of Netflix's willingness to experiment by composing a sort of death fugue that unfolds across the harsh realities of life in Manifest Destiny America. Not only does it revel in the massive, sweeping landscapes of the American West, but it's a thoughtful meditation on death that will reveal layer after layer long after you finish.
APOSTLE:
This movie is one of my absolute favourites. Director Gareth Evans dials back the hand-to-hand combat which he had showcased in his previous two movies The Raid and Raid 2 but still keeps enough space for some gory action in this grisly supernatural horror tale. Dan Stevens who stars as Thomas Richardson, an early 20th century opium addict traveling to a cloudy island controlled by a secretive cult that's fallen on hard times has done an incredible job in bringing out the rawness of the character.  The religious group is led by a bearded man named Father Malcolm played Michael Sheen who may or may not be leading his people astray. Beyond a few bursts of kinetic violence and some crank-filled torture sequences, Evans plays this story relatively down-the-middle, allowing the performances, the lofty themes, and the windswept vistas to do the talking. It's a classic cult movie that earns your devotion slowly and will be sure to keep your eyes glued to the screen at all times.
FERRIS BUELLER'S DAY OFF:
I mean it when I say this movie won't let you down. "Nine times." That's both a quote from this John Hughes classic, and the answer to the question: "What is the minimum number of times everyone should be required to watch this movie?" To all those high school students and college students out there this is just the perfect flick for you all, even if you're well out of those school years, this movie will not disappoint.  Ferris' truant exploits will give you the urge to blow of work and follow the film's tagline: Leisure Rules. Just keep in mind to ask before you "borrow" your friend's vintage Ferrari and set out to make your boss' life a living hell.
BACK TO THE FUTURE:
You probably want to turn back time and make sure this pandemic never happened so strap on your seat belts because you are going on a ride. Buckle into Doc Brown's DeLorean and head to
the 1950s by way of 1985 with the seminal time-travel series that made Michael J. Fox a household name. Netflix also has the follow-up Parts II and III, which all add up to a perfect rainy afternoon marathon for all you science fiction lovers.