Do you know the story behind Vat Savitri?

May 23, 2020
Have you heard the term "Sati Savitri" ? You must have and if you are a girl , aren't you tired of hearing it all the time ? Ok. Jokes apart. The term "sati savitri" We use to refer to someone who is too pure. It is also referred to women in a humorous manner who are overboard loyal to their significant others. To be honest in the modern age of today it has become more slang than the person who is known as Sati Savitri. 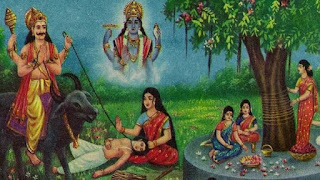 Today all the married women in India celebrate the days as Var Savitri. It is the day when all these married women pray and fast for their husbands according of the Hinduism. I didn't know much about it so I asked my mother who was performing the ritual for it. It is very similar to what they celebrate in North India, the Karwa chauth but Vat Savitri is celebrated in Uttarakhand, Bihar and Odisha. From what I got to know about this ritual worshipping is that there is a very interesting story behind how a woman brought her dead husband back to life. It's Indian mythological story.
There was a king who had no offspring. He was very desperate to have a child but didn't know how to until one day he was instructed by a saint to perform a Havan called savitri yagya. After performing the ritual, he was blessed with a baby girl but the king was upset that there would be no heir to his throne. So, the saint told him not to worry cause the princess will be the solution to all his problems and she will be the one keeping her father's name. This made the king happy and he happily accepted the baby princess.
The princess grew up to be a fine girl and soon came to the age when she married. Proposals from suitors of different Kingdoms came in but the Princess wasn't happy with any of the proposals. So, she asked her father if she could find a suitor of her own. The king trusted his daughter enough to know that she would end up with a good decision at the end because she has always done so.
She was given time for a whole day and to whatever extent she chooses to go to find herself a suitor.
So, the Princess took off to find herself a suitor.
She wandered the neighbouring kingdoms, all the lands and wets but she found nobody that will match up her preferences. Exhausted by her journey she was walking through the forest till a heavy branch of a tree was about to fall on her.  When she was saved by a man. The man was an Ordinary wood cutter. As soon as the Princess laid her eyes on him. She knew she wanted to marry him. She went with him to see his parents and while meeting them she realized that he was a fallen prince. The prince's name was satyavan. Their Kingdom was endangered by the neighboring kingdom and they had to exile into the forest. The king and queen (his parents) both lost their eyesight and the prince was the only one to help. This made her more determined to marry him.
She went back to her father, the king and told him about a man she met in the forest. To which the king hesitated but never denied it. Meanwhile Naradmuni, the messenger of God appeared. He informed Satyavan that he didn't have much time to live. More one he only had a year to live. Hearing this the king refused to marry Savitri off to Satyavan but the Princess insisted and asked Naradmuni not to worry about Satyavan 's life line.
The king wanted not to permit the marriage so he remembered the saint saying to trust her as she has a solution to everything.
Finally, the king allowed the marriage and Married off Princess Savitri to Satyavan. Savitri went to live with Satyavan in the forest. She was the ideal daughter in law and wife. She did her best to adjust and live in the forest. Meanwhile she would perform worshipping rituals like fasting to ask God for extending her husband's life line. Her worshipping helped her gain the power of which she can see and reach beyond the human can. A year passed and the day had come. Savitri realized this is the day she will lose her husband. She asked Satyavan to allow her to accompany him for the day's work. At first he refused but when she insisted he let her come along. 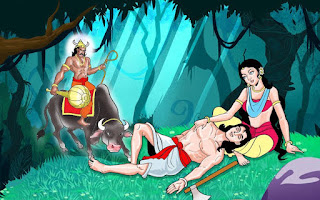 Satyavan was cutting the wood when he felt dizzy and felt like he would faint. He went to her and told her what was happening to which Savitri asked him to take a read while keeping his head on her lap. He agreed and closed his eyes to rest but he passed Away. When Savitri realized what happened she started crying loudly asking the gods to return her husband's life when two swamp of Yamraj (the god of death) arrived. They were there to take Satyavan's soul with them but Savitri's Power stopped then. Savitri's Power was strong enough to withstand the swamps. The swamps returned to Yamraj and told him what happened. To which Yamraj decided to go there and bring Satyavan's soul himself.
The Yamraj arrived in front of Savitri and was surprised to know that she could see him because only pure soul people can see him. He knew he couldn't take Satyavan's soul easily. He asked Savitri to ask anything as a wish other than her husband's life back as her sincerity for her husband was commendable. She wished for Satyavan's parents' eyesight back and the kingdom they lost. Yamraj found that her wish was quite easier than what he expected and he happily granted her wish and took Satyavan's soul with him. Half way back, Yamraj realized Savitri was able to follow him because of her power of purity. He turned back annoyed and asked her why she was following him and she again asked him to return her husband's life. To Which Yamraj told her that he can't but since she is asking for something rather than asking for another wish. This time Savitri wished for her father to have 100 sons so her father's Kingdom had an heir to the royal throne. Yamraj was confused at the same time he was annoyed that she wasn't asking anything for herself but others but he had no time to object because it was getting late. So, he granted the wish without thinking and left for his palaces in the sky.
Yamraj was about to enter the underground when he heard someone calling him to which he turned around to see Savitri standing there. He was shocked but angrier because she kept following him even when he granted her wishes. Savitri again asked Yamraj to return her husband. By this time Yamraj was already irritated by repeating himself. Angrily he said " I CAN GIVE YOU ANYTHING BUT YOUR HUSBAND." Listening to this Savitri asked him " Can I ask you for one last wish? ". Yamraj was in a hurry and he asked to ask whatever she wanted without thinking. Finally, she asked to have 100 sons of her own and without thinking Yamraj granted her wish. Hearing that this time Savitri asked Yamraj to return her husband back. Yamraj noticed the shift in her voice and in a more challenging voice he asked why he should. 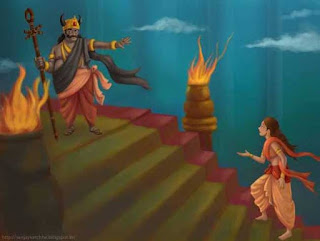 Savitri replied "You have blessed me with 100 sons but how I return back to the world without a father to them. If I return to the world with 100 sona and a dead husband. What are people going to say about me? People will question my purity which was given to me by God. Which will not only be disrespectful for me as well as the gods. Thus, you must return my husband. So, my sons can have their father and integrity to stay as it ". Listening to this Yamraj realised that he got tricked due to his rush and anger. That he can't disobey or bring dishonour to the power that was gifted to her as her rewards for purely worshipping and loyalty to her husband. She also proved her selflessness towards her families. He realized his mistake and was impressed by her intelligence. He decided to return Satyavan's soul back. He asked Savitri to go back to Earth as Sattavan would be waking up.
Savitri thanked Yamraj and rushed back to Earth where she left her husband's body. She got back to the position she was in before Satyavan woke up. Satyavan thought he was really tired and fell asleep. They return back to their home when they find the enemy of Satyavan's Kingdom waiting for him in front of the house. He was there to make alliance with the king and to give him back his country. Satyavan's partners rushed out to see the couple return and they told them that all of sudden their eyesight got back. This shocked Satyavan but he accepted it as a coincidence. The king, Satyavan's father announced that he was stepping down as the king and Satyavan to become the new king of their Kingdom which the enemy turned alliance agreed as well and they returned to their Kingdom. Satyavan and Savitri become the king and the Queen. And they had
Soon they received the news that Savitri's father's kingdom had an heir too and the oldest Prince was ready to take the throne. Nobody knew but Savitri brought happiness to her father as well as her husband's Kingdom and they all lived happily ever after.
This is the reason why married women worship Savitri as Goddess and so they can also gain the Power to extend their husband's life line and prosper to him. I don't know how accountable this story is but indeed the world is still alive with the belief in miracles.
-Durgesh Nandini Naik