May 25, 2020
West Bengal, the sweetest part of the country, is in tears. It is shattered and torn into pieces. The happy and forever cheerful state is crying today. The city is damaged and broken. The people are crying. Lack of food, no electricity and loss of shelter, yes, this is what the people are facing since the deadly super cyclone hit the state of West Bengal on the 20th of May. 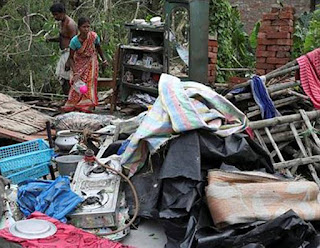 On 20th May, a deadly super cyclone strokes the state of West Bengal in the late afternoon. It was the strongest cyclone since 2007 and the only super cyclone to occur in Bay of Bengal since 1999 Odisha cyclone.
Considered to be the first tropical cyclone of the 2020 North Indian Ocean cyclone season, Amphan originated from a low-pressure area persisting a couple hundred miles (300 km) east of Colombo, Sri Lanka, on 13 May 2020. Tracking North-eastward, the disturbance organized over exceptionally warm sea surface temperatures. The Joint Typhoon Warning Centre (JTWC) upgraded the system to a tropical depression on 15 May while the Indian Meteorological Department (IMD) followed the information the following day. On 17 May, Amphan underwent rapid strengthening and became an extremely brutal cyclonic storm within 12 hours. 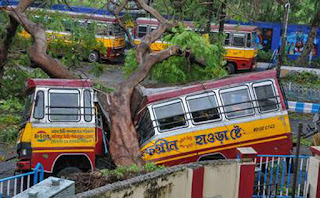 The storm continued over West Bengal for a good 5 hours and then moved towards Bangladesh. It caused huge damage over the city and the outskirts of it. Thousands of people went homeless and a huge number is reported to have lost their lives. There is a huge crisis of food and electricity over the state. Almost after a week of the terrifying storm, many parts of the city have not yet received electricity. The Prime Minister, Narendra Modi, conducted an aerial inspection of the city along with the Chief Minister Mamata Banerjee and announced a Rs 10 billion relief package for West Bengal.
With the outbreak of Covid-19, and now the deadly cyclone, West Bengal has been suffering a severe damage. It will probably take years to recover the damage that has been done. People are helpless and so are scared. No one knows what else is left to be faced, but all we can do is keep the fingers crossed and hope for a better future.