May 19, 2020
Black Holes are the most talked about and the most interesting topic for years. Scientists, cosmologists, physicists have given their entire life to figure out what exactly are black holes. Stephen Hawking the very first scientist to say that black holes are not really black, but they emit huge amount of UV radiation which are now named after him as Hawking Radiation. On 10 April 2019, the first ever direct image of a black hole and its surrounding area was published, which was made by the Event Horizon Telescope in 2017 of the supermassive black hole in Messier 87's galactic center. 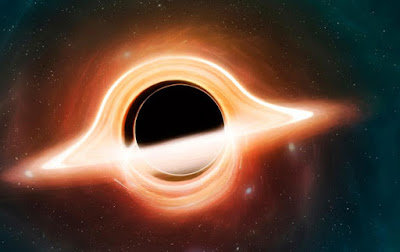 There are many interesting facts about Black Holes. Some of which are listed below:
1.    BLACK HOLES DO NOT SUCK OBJECTS INSIDE THEM: it is a misconception that black holes such in objects flying around them. They are mostly referred to as the cosmic vacuums, but they are not. It is true that they have a very high gravitational pull, but it is only as much as the star that died to form the black hole. If our Sun dies today, it will form a black hole, but will not such the Earth or the other planets rotating around them, because it will only have the same gravitational pull as the Sun.
2.    EINSTEIN WAS NOT THE ONE TO DISCOVER BLACK HOLES: Einstein was not really the one who discovered black holes. His theory of relativity could predict their formation, but it was actually Karl Schwarzschild who used the revolutionary equations of Einstein to later find that black holes could actually form.
3.    SPAGHETTIFICATION: Black holes have the ability to stretch human and every other object into a spaghetti like shape. This process is called Spaghettification. It totally in the work of gravity. If your feet is closer to the black hole, it will be pulled more by the gravitational pull that your upper body.
4.    THEY COULD SPAWN NEW UNIVERSES: It might sound crazy that black holes could spawn new universes ,especially since we're not sure if other universes at all exist – but the theory behind this is the most worked on research today. It can be easily defined when you take a look at our own universe. It has some extremely suitable conditions that came together to create life. If you twist these conditions by even a micro amount, then the entire life would come to an end. The singularity at the centre of black holes breaks down our standard laws of physics and could, in theory, change these conditions and spawn a new, slightly distorted universe.
5.    BLACK HOLES PULL TEH SPACE AROUND THEM: Imagine space as a stretched rubber sheet with criss-crossing grid lines on it. When you place a heavy object on the sheet, it sinks a little. The more heavy or massive an object you put on the sheet the deeper it sinks. This sinking effect disturbs the grid lines and they remain no longer straight. They bend. The deeper the well you make in space, the more space gets disturbed and curved. And the deepest of wells are made by black holes. Black holes create such a deep well in space that nothing has enough energy to get back out, not even light. 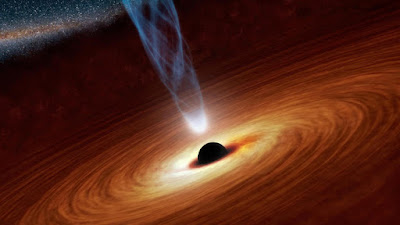 6.    BLACK HOLES ARE THE ULTIMATE FACTORIES OF ENERGY: Black holes can generate energy even more efficiently than our Sun. Its all related to the disk of materials that rotate around the black hole. The material that is nearest to the border of the event horizon on the inner edge of the disk will orbit much more quickly than those material at the very outer edge of the disk. This is because the gravitational pull is stronger near the event horizon. Because the material is orbiting and moving so rapidly, it heats up to billions of degrees Fahrenheit, which has the ability to transform mass from the material into energy in a form called blackbody radiation.
7.    THER E LIES A SUPER MASSIVE BLACK HOLE IN THE CENTRE OF OUR GALAXY: Scientists believe that there lies a super massive black hole in the centre of every galaxy, including our own which acts as an anchor galaxy and holds them together in space. The super massive black hole in the centre of our galaxy is called the Sagittarius A which is four million times more massive than our Sun. It is approximately 30,000 light years from our planet and is dormant, but scientists do believe that 2 million years ago it exploded and that it was visible from the Earth.
8.    TIME SLOWS DOWN NEAR THE BLACK HOLE: This can be explained by the Twin Paradox. One of the twin stays back while the other travels at the speed of light to a distant star and comes back to see that the twin staying back on Earth has aged more than the one that was sent to space. It says that the faster you move, the slower the time becomes for you. So, in a black hole, the gravitational pull is so strong, that you tend to get pulled so fast that the time becomes much slower. In the movie, Interstellar, when the group of astronauts reach to the first plant which was the closest to the black hole, time was extremely slow there. An hour in that planet, was seven years back on Earth.
9.    BLACK HOLES TEND TO DIE OVER TIME: This theory was first proposed by Stephen hawking in 1974. This phenomenon was named as hawking radiation, after the name of the great scientist. It is said that the Hawking Radiation disperses the mass of a black hole into space over time and will continue to do it until there is nothing left. That is why, this phenomenon is also called black hole evaporation.
10.    ANYTHING CAN BE TURNED INTO A BLACK HOLE, THEORITICALLY: As we know that black holes are the compressed sixed stars which are so dense in the centre that they tend to have a very high gravitational pull. For example, if we take our Sun and compress it in a size which is way too small than its actual size, it will also become a black hole. Even we can turn ourselves into black holes as well. But practically, we know that a black hole forms when a star 20 or 30 times more massive than our Sun gravitationally collapses. 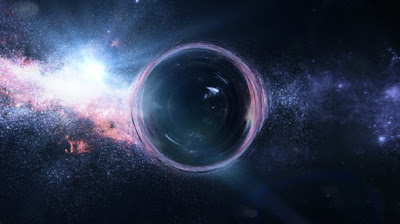