One of the most acclaimed and renowned astrologers from India, Dr. Acharya Vinod Kumar Ojha, made the country proud as he was honoured with the ‘Certification of Excellence’ of WBR by the British Parliament on 28th September 2022, for his matchless contribution in promoting Astrology and Vedic Science. The award was presented by Honourable Virendra Sharma of the British Parliament, England, in a ceremony conducted by WBR to honor the exceptional work done by individuals in different verticals.

On winning the Award, Dr. Vinod Kumar Ojha said, “I am delighted for this recognition at the prestigious WBR event, which celebrates and awards excellence. I want to make everyone aware of astrology and how it can transform one’s life. It is the love of you all, that allows me to work towards creating a benchmark in the field of astrology and Vedic science.” 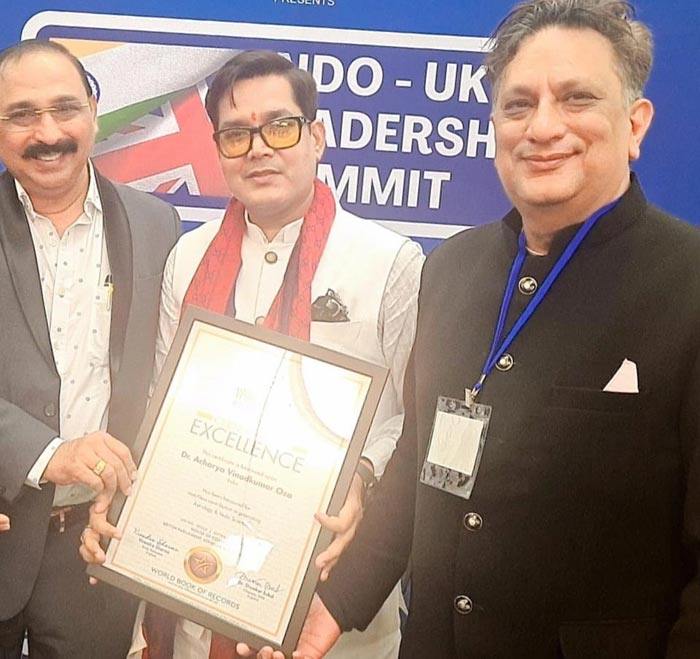 Dr. Acharya Vinod Kumar Ojha is an acclaimed name in the Occult industry who has transformed the lives of countless people. His expertise in reading and analyzing Horoscopes has altered the lives of many people and unlocked their potential to reach their desired goals. Acharya Ojha is originally from Allahabad, a city that has been the birthplace of some of the greatest Pandits and Acharyas in history. Over the years, Acharya Ojha gained knowledge in a variety of subjects including Astrology, Gemology, Numerology, Vastu, and Panchang. Acharya Ji has appeared on countless shows and channels like - Darshan24, Shraddha TV, Sadhna, Sanskar, Sony Pal, Sab TV, Zee Jagran, and many others. He has established his benchmark globally with his skills and knowledge. He has been conferred the status of doctor by esteemed European and International universities.