August 11, 2022
One guy stands out in all his uniqueness and in a league of his own in the history of India's struggle for independence. In terms of his overall personality, Subhas Chandra Bose is a singular phenomenon of twentieth-century India. He is unparalleled in terms of body and mental makeup, manner and way of life, ideology, action-packed drama, and daring unsurpassed in modern annals. It is important to tell and comprehend Subhas Chandra Bose's tale in light of the protracted struggle of the Indian people for independence from 1857 to 1947. Midpoint of that crusade was his birth in 1897. He was raised in tune with the development of India's national movement, having experienced the Renaissance behind him. He has responded and reacted to it favourably since he was a little child. He was already a rebel at heart as a young student in a foreign missionary school since he found the environment alien to his personality.

Years have now passed. In the year 1947, India attained freedom. Nobody ever learned what happened to the first soldier in the final war of the Indian Independence struggle because Netaji Bose wasn't present at the moment. He did, however, leave behind a rich legacy and a rich tradition. The home painted in yellow, red, and green was one of the most important reminders of Netaji's recollections. It stood as gracefully, courageously, and passionately as the great leader himself.There is also a home for the fabled Wanderer BLA-7169, which saw Netaji's heroic escape on the evening of December 16, 1941. Throughout this essay, I'll take you, my readers, on a journey through the various stages of Netaji's life and struggle, which have been wonderfully and meticulously depicted inside the fabled mansion.

Elgin Road was previously known as Lala Lajpath Sarani, but it has undergone a very noticeable modernization. bustling metropolitan scenes with a strong sense of heritage across Kolkata. Nearly in the middle of the street, beside a retail area that is a favourite hangout for residents, is where Netaji's House is located. This particular area probably provides a pretty fair comparison of history and modernity. As it is relatively close to the Rabindra Sadan Metro Station and hence has decent metro connectivity, Netaji Bhawan is quite easily accessible in Kolkata, a city that is constantly growing and bustling.

The house's characteristic pillars and porticos give it the outside of a typical Bengali home from the 20th century. There will be a room on the right side as we pass through the gate that sells admission to the museum that is housed inside. A bookstore that offers books about Netaji's life and struggles is also located in this room. The price of a ticket is quite low, at 20 cents. A very significant exhibit that felt like a time machine was on display inside a glass box just a few steps from the ticket office/book store. The 1937 Model Wanderer BLA-7169 sedan was the exact same one that Netaji used to flee from the British.On January 18, 2017, the vehicle was officially unveiled by the then-President of India, Pranab Mukherjee after being restored to operational condition by the automotive behemoth Audi. 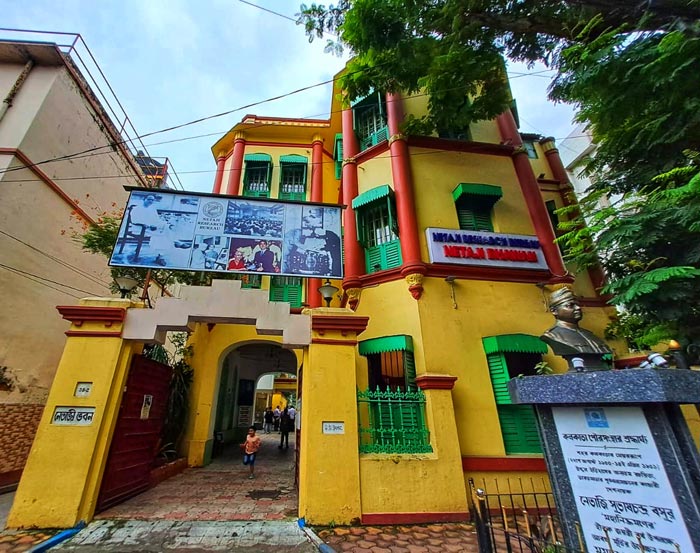 Turned away from the automobile and walked through the front entrance of the house. The upper story was accessible by a set of stairs. With hardwood staircases and floors, the interiors were meticulously and passionately maintained to give tourists a sense of the pre-independence era. The home had two floors that were reachable. We reach Netaji's bedroom on the first floor as we proceed up the wooden stairs. The furnishings and items used by Sarat Chandra Bose, Netaji's older brother (Mejdada), are located in the following room. Netaji's office room, which belonged to him and depicts the time of his presidency of the Indian National Congress, is also on this floor. The Indian tricolour is still present in the room's painting. The upper floor is home to a treasure trove of various images, records, and articles on Netaji's life and work that are arranged in a methodical, chronological order. His original passports and other memorabilia are also on exhibit.
then proceed to the Asia Room by crossing the hallway. The daring attack on India's northwestern frontier by the Indian National Army across the now-northeastern states is chronicled in history. The supreme commander's top-boots, desk, and even the garland he was given on October 21, 1943, have all been acquired for the museum.

Another significant and intriguing thing. It was the staircase on the back side of the home that Netaji used to flee in complete secrecy and invisibly. "Netaji Subhash Chandra Bose utilised this staircase for his secret departure from this residence on the night of January 16–17, 1941. The Car in which he was driven by Sisir Kumar Bose to Gomoh was parked near to the Landing," read a marble plaque on the foundation pillars of the stairs. It seemed strange to think that I was actually there, seeing the magnificent achievement take place that evening.
By- Sriparna Mukherjee
Profession – Student
University – Amity University Kolkata

About the Author
My name is Sriparna Mukherjee, I am a creative and quick thinking, meticulous and motivated individual with a Bachelor degree in English, currently pursuing Masters in  Journalism and Mass communication from a top-tier University. I have a lot of ambition and aspiration. I continually establish objectives for myself because I thrive on challenges and need something to aim towards. I have a keen interest in watching movies, reading blogs, listening music, singing, painting and dancing.